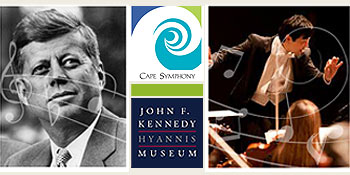 The Cape Symphony is partnering with the JFK Hyannis Museum Foundation to present a celebratory concert next month, in recognition of the former president’s 100th birthday.

“This will be a moving experience featuring songs like ‘High Hopes’ as performed by Frank Sinatra on the 1960 campaign trail, Leonard Bernstein’s ‘Fanfare for the Inauguration of John F. Kennedy,’ and ‘The Dream Lives On: A Portrait of the Kennedy Brothers,’ which will incorporate archival video of speeches given by John, Robert and Ted Kennedy,” saidCape Symphony Artistic Director and Conductor Jung-Ho Pak.

Kiki and Ted Kennedy Jr. are honorary chairs for the event and will be among the contributors to this celebratory tribute.

In addition, world-renowned cellist Amit Peled, award-winning baritone David McFerrin of the Boston Lyric Opera, and the Cape’s own Chatham Chorale will all take part in the experience.

“Amit will play ‘Song of the Birds,’ a traditional Spanish song performed by Pablo Casals when he appeared at the Kennedy White House in 1961,” explained Pak. “His performance will be even more special because he has the actual cello formerly owned by Casals.”