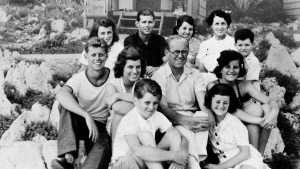 The Kennedy family is an American family prominent in politics, public service and business, particularly during the 20th Century. Joseph P. Kennedy, industrialist and politician, and his wife Rose, daughter of former Boston Mayor John F. “Honeyfitz” Fitzgerald, purchased a large home on the water in Hyannis Port in the 1920’s. That home was the base for their nine children, Joseph Jr. John F. “Jack,” Rosemary, Kathleen, Eunice, Patricia, Robert F. “Bobby,” Jean and Edward M. “Ted“” during their lives in the U.S. Embassy in London, World War II, the U.S. Senate, presidential campaigns and the White House.

That home, with two nearby homes purchased by Jack and Bobby, became the Kennedy Compound and the center of the political universe in the early 1960’s. On the evening TV news, the nation watched the family at vigorous play through triumph and tragedy.