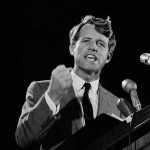 HYANNIS – A special exhibit commemorating the life and legacy of Robert F. Kennedy opens Monday at the John F. Kennedy Hyannis Museum.
“RFK: Ripple of Hope,” which was assembled in collaboration with the RFK Human Rights Foundation, begins with Robert’s early years, including his time on Cape Cod.

But the focal point covers his time serving as U.S. Attorney General and a U.S. Senator, culminating with his presidential campaign.
“The theme ‘Ripple of Hope’ comes from his most famous and powerful speech delivered in Cape Town, South Africa,” said Rebecca Pierce-Merrick, the curator of the JFK Hyannis Museum.