JFK Hyannis Museum President and CEO to Retire in 2019

JFK Hyannis Museum President and CEO to Retire in 2019 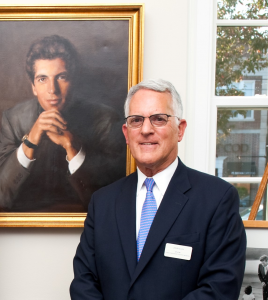 John L. Allen, President and CEO of the John F. Kennedy Hyannis Museum, has announced that he will retire at the end of 2019.

“I have been honored and privileged to lead this extraordinary museum and its talented staff,” says Allen, who turned 75 in February and discussed his retirement with foundation directors in the fall of 2018. Since that time, he has shared his plans with museum staff, major donors and friends of the museum. “During my career at the museum, I have had the pleasure of working with a dedicated board of directors, many individuals, businesses and community partners, who care about the vision and mission of the museum. Together, we have chartered an exceptional course that will continue to serve the museum and the Cape Cod community.”

Over a nearly seven-year period, Allen spearheaded a complete upgrade of exhibits and exhibit areas throughout the museum. He also guided the expansion of cultural programming across the Cape and Islands, including the Summer Speaker Series featuring notable authors, public servants and influential dignitaries, as well as poignant lectures and documentary screenings. In recent years, Allen has launched efforts to modernize the building, such as renovating space on the second floor to create the Scudder Family Community Room—slated for completion in April 2020. The remodeled area will improve visitors’ experience and meet the needs of the museum’s growing educational and cultural programming.

The museum is the fourth major attraction on the Cape, with an average of 70,000 annual visitors from the United States and around the world. Its exhibits and programs help preserve President Kennedy’s unique local heritage by focusing on topics centered on nonpartisan themes of civic engagement, public service and JFK-era American/world history.

In addition to enhancing exhibits, Allen has led the growth of the museum’s civic education programs and youth activities, serving pre-K through high school. Last year, 2,400 Cape and Islands youth participated in museum-related educational activities designed to teach the value of civic engagement.

Peter Ubertaccio, Chairman of the Board of The John F. Kennedy Hyannis Museum Foundation in Hyannis, expressed his admiration for Allen’s strong vision and meaningful work with the community—sentiments also shared by the board. Under Allen’s leadership, the museum has consistently achieved excellent financial performance.

“We are confident that we will have a successful search for the next president, attracting a person who will lead the vision and thriving performance of the museum—as well as of our growing educational and cultural programs—and the ongoing modernization work of the museum,” says Ubertaccio. “Thanks to John’s leadership, the museum is poised for someone to advance it to the next level. The institution is an integral part of our community.”

A succession committee was established by the board to search for the museum’s next president. The formal search will be launched in April and It is anticipated the committee will complete their work in the third quarter of 2019. During this transition period, Allen will remain involved in the museum. The email address for the succession committee is www.careers@jfkhyannismuseum.org.