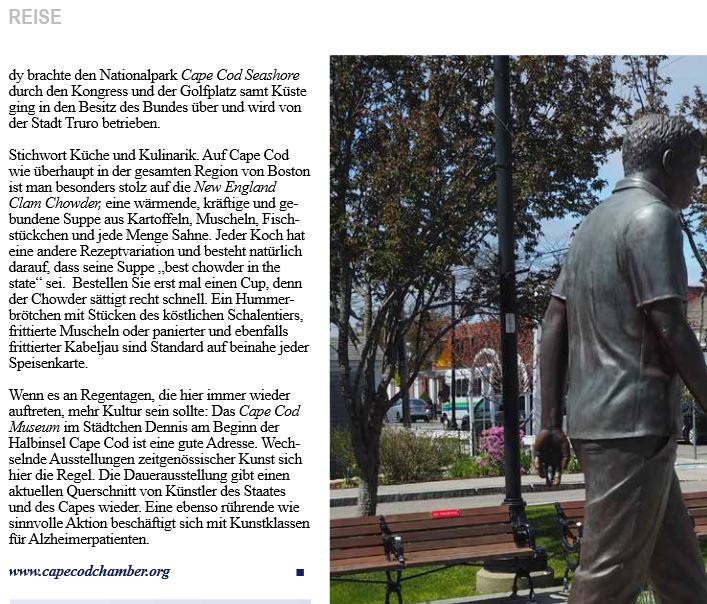 The John F. Kennedy Museum is proud to be included in a recently published travel article in a German magazine – GOLFEN. The article is written by German journalist Cornelia Bruckner and is based on her May 2019 Summer visit to Cape Cod. The JFK Museum is grateful for being included in worldwide magazines as a recommended place to visit on Cape Cod.

CAPE COD, THE CAPE of the COD ONCE BELONGED TO THE FISHERMEN, TODAY IT BELONGS TO THE WEALTHY
Cape Cod: Playground of the Rich by Cornelia Bruckner

Cape Cod is called nothing more than Cape of the Cod. A good 100 years ago the trawlers ran from ports of this peninsula south of Boston, Massachusetts to the north Atlantic Ocean to gather precious food fish. Whales and other marine mammals were also hunted. The primary money fish was and is the lobster catch. After the fishermen came the wealthy from Boston to claim the peninsula as their playground for themselves as a weekend resort: golf courses, marinas, beaches and fenced and hedged private villas. The wealthy like their privacy.

One can gain some insights into the life of one of the most famous families, which had its summer home here in Hyannisport, at the JFK Hyannis Museum. In the middle of the hardworking town of Hyannis is a relatively low building one finds many artifacts and reminders of the charismatic 35th President of the United States of America such as photographs, documents as well as insights into Kennedy’s private life — especially JFK’s presidency. Federal authorities are fairly positive — supported by conspiracy theories from the Sixth Floor Museum in Dallas — that this warehouse was the shooting location of JFK’s killer, Lee Harvey Oswald.

The connection of the Kennedy family to Hyannis and Hyannisport was intimate. They own and owned summer houses in Hyannisport and offshore on the nearby island of Martha’s Vineyard.

Today the Cape presents its visitors a varied experience. One of the most popular destinations is the place where the first settlers made contact with indigenous people in the New World in Provincetown in November 1620. To honor the original Pilgrims, the Town built the Pilgrim Monument, reminiscent of a similar tower which stands in Siena, with Italian workers participating in its construction.

P-town, which the locals call Provincetown, is a tranquil, cozy and provincial town as long as the Fast Ferry remains in Boston. From the beginning of May, however, the ferry’s disembarking passengers heap into the souvenir shops, restaurants along Commercial Street and flood the adjacent streets as well. In the summer, the Town’s population can increase as much as tenfold.

Hotel rooms and guest houses with an international standard one can search for in vain throughout the peninsula. In addition to the many summer houses and villas, one finds small hotels and especially bed & breakfast inns are the norm. Some tourist lodgings are plush, others austere, reminiscent of ships cabins.

The Captain’s House Inn, located in the small Town of Chatham, is a small hotel in a class of its own with more than 200 years of history with a great English garden. The 26 rooms have their own styles and facilities, the common areas and rooms have plush seating, comfortable four-poster beds and a mix of antiques. There are books and DVDs in the library in the event of inclement weather. The Inn’s lovely afternoon English tea with scones and whipped cream is very British.

The motivation to be active in good weather has no limits but, in May, it can still be rainy and quite cold. When the dune tours go, it’s an all-American experience. Air-conditioned SUVs drive through the dunes and offer a photo stop atop the highest dunes which so inspired so many artists, writers and others. If you prefer sport, rent a kayak and, with the whole family, paddle with the family offshore. It is best, of course, to experience the beach and towns via bicycle.

Keyword: GOLF. The first-mentioned President, John F. Kennedy, was an passionate golfer. On the Cape there are 27 public and 15 private golf courses. In the latter case, however, an invitation from a member, otherwise there only remains the cheaper, but usually by no means worse, public clubs. One of the public courses, the Highland Links Course in Truro, meanders through the dunes; the greens fee costs $ 35 for nine holes. The course was established in the year 1882 and offers spectacular views on the North Atlantic and, before the 6th hole, bobbing whales. A piece of Scotland in the new world! The special feature of this place: President Kennedy brought the Cape Cod National Seashore into being through governmental action and the golf course and its coastline became part of the course and is now owned and operated by the Town of Truro.

Keyword: Cuisine and Culinary Art: On Cape Cod and Boston locals are especially proud of New England Clam Chowder. a warming, strong soup of potatoes, clams, pieces of fish and lots of cream. Every chef has
another recipe variation and, of course, insists that his is “best chowder in the state.” First order just a cup, because chowder is quite filling very fast. A lobster roll with pieces of delicious lobster, fried mussels or breaded and fried cod are standard on almost every menu.

On rainy days, enjoy cultural sights. Cape Cod Museum of Art in Dennis is a good spot with changing exhibits of contemporary art. The permanent exhibit gives one a cross section of artists across the Cape and Massachusetts. An equally touching and meaningful program deals with art classes for Alzheimer’s patients.