Special Screening: “RFK in the Land of Apartheid: A Ripple of Hope”. Free to attend! 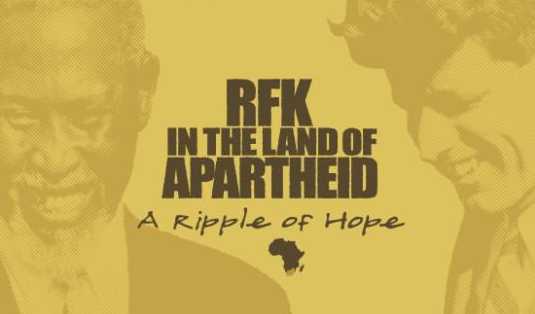 Special Screening: “RFK in the Land of Apartheid: A Ripple of Hope”. Free to attend!

Join us for a special screening and discussion of RFK in the Land of Apartheid.

This event is FREE to attend, seating is limited to 40.

Using previously unseen archival materials, and interviews in South Africa and the US, this fascinating documentary tells the unknown story of Senator Robert Kennedy’s important visit to South Africa in June 1966 during the worst years of Apartheid. The film evokes the connections between the American Civil Rights Movement and the Anti-Apartheid Movement in South Africa. The filmmakers find witnesses to this moment in time through the sights and sounds of present-day South Africa.

The film highlights RFK’s meeting with the banned leader and first African to win the Nobel Peace Prize, Chief Albert Luthuli. The film follows Kennedy to the site of his famous “Ripple of Hope” speech at the University of Cape Town, his visit to a pro-Apartheid university and Soweto. We witness Kennedy publicly challenging the dominant Cold War ideology that Anti-Communism, espoused by repressive regimes like that in South Africa, should be the only factor determining American foreign policy.

This event is Free to attend. Seating is limited to 40.
Reserve your seat below.

Trailer – RFK In The Land of Apartheid