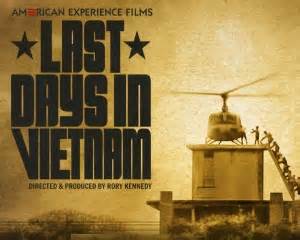 The John F. Kennedy Hyannis Museum Speaker Series in collaboration with The Woods Hole Film Festival present a special screening of the Academy Award nominated documentary film LAST DAYS IN VIETNAM by Rory Kennedy. Rory Kennedy will attend the screening and participate in a question and answer session with moderator Rob Sennott following the film.

About the Film
During the chaotic final days of the Vietnam War, the North Vietnamese Army closes in on Saigon as South Vietnamese resistance crumbles. The United States has only a skeleton crew of diplomats and military operatives still in the country. As Communist victory becomes inevitable and the U.S. readies to withdraw, some Americans begin to consider the certain imprisonment and possible death of their South Vietnamese allies, co-workers, and friends. Meanwhile, the prospect of an official evacuation of South Vietnamese becomes terminally delayed by Congressional gridlock and the inexplicably optimistic U.S. Ambassador. With the clock ticking and the city under fire, a number of heroic Americans take matters into their own hands, engaging in unsanctioned and often makeshift operations in a desperate effort to save as many South Vietnamese lives as possible.

Prior to the screening, $50 ticketholders may attend a reception with Rory Kennedy at the JFK Hyannis Museum