Join us at the JFK Hyannis Museum as we host Fredrik Logevall, Author of JFK: Coming of Age in the American Century, 1917-1956.

Pulitzer Prize winning author, Logevall, returns to Cape Cod to continue the conversation generated by his exhaustive biography of JFK covering the years from his birth through 1956, including his assessment that JFK’s “magnetic leadership and inspirational rhetoric, elevated America’s belief in the capacity of politics to solve big programs and speak to society’s highest aspirations….” 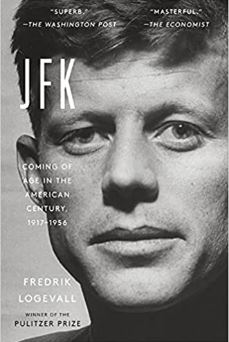 Fredrik Logevall is Laurence D. Belfer Professor of International Affairs and Professor of History at Harvard University. He is the author or editor of ten books, most recently JFK: Coming of Age in the American Century (Random House, 2020). His book Embers of War: The Fall of an Empire and the Making of America’s Vietnam (Random House, 2012), won the Pulitzer Prize for History as well as the Francis Parkman Prize, the Arthur Ross Award, and other prizes. Logevall’s essays and reviews have appeared in The New York Times, The Washington Post, The Boston Globe, The Los Angeles Times, The London Review of Books, and Foreign Affairs, among other publications. A native of Stockholm, Sweden, he lives in Cambridge, Massachusetts.

Famous Couples in Presidential History, From the Kennedys to the Obamas