Join us at the JFK Hyannis Museum as we host Patricia Sullivan Ph.D.author of the book Justice Rising – Robert Kennedy’s America in Black and White.

History, race and politics converged in the 1960s in ways that indelibly changed America. In this landmark reconsideration of Robert Kennedy’s life and legacy, Patrcia Sullivan draws on government files, personal papers and oral interviews to reveal how he grasped the moment to emerge as a transformational leader. He helped shape the 1964 Civil Rights Act, reaching out to prominent Republicans for support, but he knew no law would end racism. On the night of Martin Luther King’s assassination, RFK’s anguished appeal captured the hopes of a turbulent decade: “In this difficult time for the United States, it is perhaps well to ask what kind of nation we are and what direction we want to move in.” It is a question that remains urgent and unanswered. 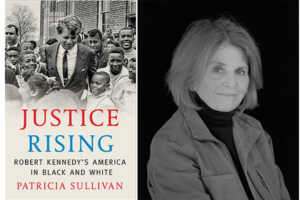 Patricia Sullivan is a professor of history at the University of South Carolina. Her previous book, Lift Every Voice: The NAACP and the Making of the Civil Rights Movement (2009) is a story of how legal brilliance, grass roots organizing, Black culture and institutions, interracial alliances, and a fundamental faith in democracy built and sustained long-term struggles to uproot racism and advance justice. It is also a story of the deep and tangled roots of racism in America.