The John F. Kennedy Hyannis Museum is proud to welcome author James Robert Carroll as he talks about his book One of Ourselves: John Fitzgerald Kennedy in Ireland. Books will be available for sale for signing by the author.
This event is FREE to attend! Reserve your seat now, seating is limited to 50. 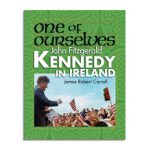 One of Ourselves, John Fitzgerald Kennedy in Ireland is a day-by-day, hour-by-hour account of President Kennedy’s visit to Ireland in late June 1963:  the places he visited; the people he met – political and cultural luminaries and average Irish citizens alike; the throngs who lined the roads to catch a glimpse of him or gathered to hear him speak; and the events that crowded his schedule.

Exhaustively researched from written and oral sources, the book tells a memorable tale of the president’s ‘homecoming’ to a people and land long etched in his heart and at last on the verge of taking their place in the modern world’s politics and economy.

James R. Carroll, author of One of Ourselves: John Fitzgerald Kennedy in Ireland, is an award-winning journalist who has covered Washington for more than three decades. He is the former Washington correspondent for Gannett Newspapers and The Louisville Courier-Journal, covering the White House, Capitol Hill and federal agencies. Before that he was a Washington correspondent with Knight-Ridder Newspapers. Carroll’s work has appeared in newspapers across the country as well as in USA Today. Also author of The Real Woodrow Wilson, he has appeared on MSNBC, CBS and Sirius XM radio and is a regular contributor to Bloomberg News. He currently is Washington bureau chief of Capital News Service, run by the University of Maryland’s Philip Merrill College of Journalism. Carroll is a graduate of Boston University, where he also obtained his master’s degree. He and his wife, Carol Vernon, have two daughters and live in Alexandria, Virginia.