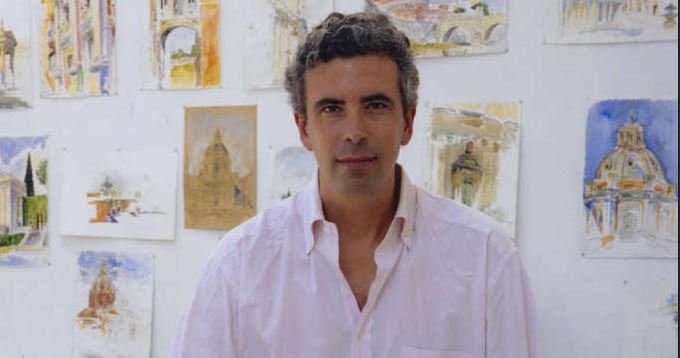 Please join us for a lecture and book signing with Adam Van Doren, artist and author of The House Tells the Story: Homes of the American President. The book chronicles Van Doren’s visits to a number of presidential homes and features many illustrated letters Van Doren composed to David McCullough. Thomas Fleming, author of The Great Divide: The Conflict Between Washington and Jefferson That Defined a Nation: “This is a book that transcends ordinary history on almost every page… I can’t think of a better way to get to know those mysterious beings we call presidents.”The book will be available for sale and signing at the event.

About the Book: The House Tells the Story 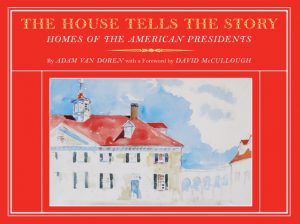 The homes of American presidents range from the grand and instantly recognizable (The White House) to the modest and unassuming (Calvin Coolidge). And their architecture presents an equally surprising array of styles and approaches- from acknowledged masterpieces like Jefferson’s Monticello and Washington’s Mount Vernon to the grand retreats of the Roosevelts, from the modest (and deliberately self-effacing) homes of Harry Truman and Jimmy Carter to the grand summer retreats of Jack Kennedy and George W. Bush. In many cases there are official, and occasionally elaborate, brochures prepared by the Parks Department that describe these houses, but in Adam Van Doren’s book, the reader gets to visit them personally, without the gloss of bureaucratic puffery.

This book had its origins in letters that the author wrote to his friend and fellow watercolorist, David McCullough. The letters were personal, charming and often revealing, for what Van Doren saw in these homes, the furniture, the pictures on the wall, the knickknacks left unnoticed and unrecorded on shelves and tables, revealed far more about the inhabitants than the official biographies often suggested. Truman and the cracked linoleum in his kitchen, Roosevelt and the still present memory of his beloved dog Fala, the wisteria Abigail Adams planted on the front porch of Peacefield, the paintings George W. Bush recently completed, leaning against the wall at his ranch in Crawford, Texas. All these incidentals become mirrors into the lives and character of the inhabitants-and in them, and through them, the personality of the presidents, and the passage of their presidency is truly revealed. These are houses that, through the eyes of an artist, do indeed “tell a story”.

Here are fifteen homes in all – what Van Doren considers the most interesting- all presented in full page panoramas and again, and in more intimate detail, in the letters he has written over the past year to his friend and fellow watercolorist, the historian David McCullough who himself has provided a lengthy and revealing Introduction. Between the text that explains each visit, the encounters and conversations with the surviving presidents, and the artwork itself, the reader grasps, intimately and often memorably, what the office demanded and how each of these widely varied personalities responded to the challenges it presented. This is history- political, social and personal, at its very best.

Adam Van Doren is the artist and author of The House Tells the Story: Homes of the American President (Godine), which includes a foreword by Pulitzer Prize winning historian David McCullough. The book chronicles Van Doren’s visits to a number of presidential homes and features many illustrated letters Van Doren composed to McCullough. Thomas Fleming, author of The Great Divide: The Conflict Between Washington and Jefferson That Defined a Nation: “This is a book that transcends ordinary history on almost every page… I can’t think of a better way to get to know those mysterious beings we call presidents.”

Van Doren’s artwork is included in the collections of the Art Institute of Chicago; The Wadsworth Atheneum; The Museum of Fine Arts, Boston; The Princeton University Art Museum; and The Museum of Fine Arts, Houston. His work has been exhibited at the National Portrait Gallery in Washington D.C., among other institutions, and Van Doren teaches at Yale University, where he is also an Associate Fellow.

Van Doren is the subject of a monograph (Hudson Hills Press, 2007) that features his watercolors of Paris, Venice, Rome, and New York, and which includes essays by Avis Berman, Samuel G. White and Richard Boyle. In 2009, the book An Artist in Rome was published (Kelly-Winterton Press) in collaboration with the noted poet John Tagliabue, and features Van Doren’s paintings from when Van Doren was a Visiting Artist at the American Academy in Rome. Two catalogs have been published (The Renaissance Studios, New York) of Van Doren’s paintings with essays by Mark D. Mitchell, Holcolmb Green Curator of American Art at Yale University; and Patricia Hickson, Emily Hall Tremaine Curator of Contemporary Art, The Wadsworth Atheneum Museum of Art. A recent publication, A Yale Sketchbook (Yale University, Lustman Fellowship Fund), includes Van Doren’s paintings of the architecture of the campus and contains essays by Pulitzer Prize winning critic Paul Goldberger and former New York magazine critic Carter Wiseman.

Van Doren is a graduate of Columbia University and has published An Artist in Venice (Godine 2013), with commentary by Simon Winchester and Theodore Rabb; and essays in American Artist Magazine and The New York Times, among others. He has written and directed two documentaries about the arts which were broadcast on PBS and cable television: James Thurber: The Life and Hard Times, narrated by George Plimpton, which was awarded a major grant from the National Endowment for the Humanities; and Top Hat and Tales: Harold Ross and the Making of The New Yorker, narrated by Stanley Tucci.

Van Doren is a member of the Authors Guild.