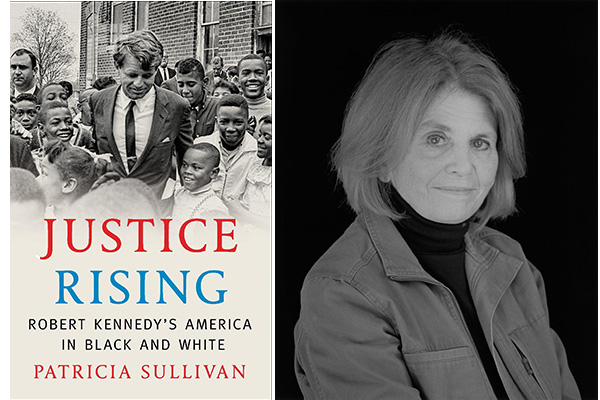 Event: $20 per person.  Seating is limited to 45 attendees. Purchase tickets below.

About the Book: Justice Rising

This leading civil rights historian places Robert Kennedy for the first time at the center of the movement for racial justice of the 1960s—and shows how many of today’s issues can be traced back to that pivotal time.

History, race, and politics converged in the 1960s in ways that indelibly changed America. In Justice Rising, a landmark reconsideration of Robert Kennedy’s life and legacy, Patricia Sullivan draws on government files, personal papers, and oral interviews to reveal how he grasped the moment to emerge as a transformational leader.

When protests broke out across the South, the young attorney general confronted escalating demands for racial justice. What began as a political problem soon became a moral one. In the face of vehement pushback from Southern Democrats bent on massive resistance, he put the weight of the federal government behind school desegregation and voter registration. Bobby Kennedy’s youthful energy, moral vision, and capacity to lead created a momentum for change. He helped shape the 1964 Civil Rights Act but knew no law would end racism. When the Watts uprising brought calls for more aggressive policing, he pushed back, pointing to the root causes of urban unrest: entrenched poverty, substandard schools, and few job opportunities. RFK strongly opposed the military buildup in Vietnam, but nothing was more important to him than “the revolution within our gates, the struggle of the American Negro for full equality and full freedom.”

On the night of Martin Luther King’s assassination, Kennedy’s anguished appeal captured the hopes of a turbulent decade: “In this difficult time for the United States it is perhaps well to ask what kind of nation we are and what direction we want to move in.” It is a question that remains urgent and unanswered.

About The Author: Patricia Sullivan

Patricia Sullivanis a professor of history at the University of South Carolina. Her previous book, Lift Every Voice: The NAACP and the Making of the Civil Rights Movement (2009) is a story of how legal brilliance, grass roots organizing, Black culture and institutions, interracial alliances, and a fundamental faith in democracy built and sustained long-term struggles to uproot racism and advance justice. It is also a story of the deep and tangled roots of racism in America.