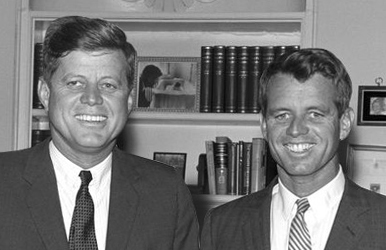 On Tuesday, June 9th on a warm, overcast morning, a crowd gathered in the courtyard of the John F. Kennedy Hyannis Museum to celebrate the Grand Opening of the new exhibit, Jack and Bobby: Brothers First. The exhibit covers the duration of the relationship, from childhoods spent on the Cape, to the campaign trail, to the political and diplomatic challenges the brothers faced together during the Kennedy administration. It features 80 rare photographs, private letters and personal quotes from the Kennedy brothers. To open the event, third graders from the Hyannis West Elementary school sang the national anthem in front of the statue of President Kennedy before the crowd moved inside to the front gallery of the museum, where the exhibit is located. 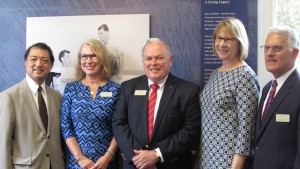 The crowd included those such as Japanese Consul General Tom Himeno, the BarnstableTown Manager Tom Lynch, Vice President of the John F. Kennedy Hyannis Museum foundation Wendy Northcross, while exhibit designer Roger Westerman was thanked in absentia, along with the legacy sponsor, the Bank of Cape Cod. The first speaker was John Allen, executive director of the museum. He spoke about how the new exhibit “reflects where the museum is going” as it continues to grow and evolve in the future as one of the major regional museums. He ended his speech with an uplifting outline of the future of the museum, which includes plans to borrow exciting and historical artifacts from the Kennedy Presidential Library in Boston. 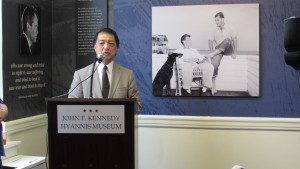 Consul General of Japan Tom Himeno, who works to create and foster better relations between Japan and New England, then came to the podium. Mr. Himeno referenced the special relationship between Japan and the Kennedy family. In the spirit of the inaugural address, Mr. Himeno hoped to be a part of the dream of “citizens of the world” engaging in international cooperation so famously mentioned in the speech.

Dick Neitz, the President of the museum foundation, then took the stage. He welcomed those present to the museum on one of its first steps to becoming a truly “world-class” regional museum. He referenced the museum’s growing educational and speaker programs as well as future fundraising efforts to improve and enhance the grounds, building, and exhibits of the museum.

Co-founder and curator of the museum, Rebecca Pierce Merrick expressed excitement over the museum’s “largest special exhibit ever,” which “through images, text and video, portrays the relationship forged in Hyannis port which came to have great effect on our nation’s history.” The exhibit explores their relationships, both familial and political. Mrs. Pierce Merrick explained that Jack and Bobby: Brothers First is a “first for the JFK Hyannis museum” because it “presents a closer look at an aspect of President Kennedy and his family that extends beyond Hyannisport,” though the area always remains at the center of the family and the President himself.

Christopher Szwedo, the director of the documentary “Eye on the 60s” commented how important museums and exhibits like Jack and Bobby are to continuing and preserving the legacy and history of the Kennedys for the children of the next generation. Wendy Northcross expressed her excitement about the new, modern design of the exhibit. She also pointed out the need for more space, historical artifacts, and a portion of the museum that caters to the education needs of children—all of which are hopefully in store for the future of the museum. The day was an exciting, important event for the museum which represents not only the current special exhibit, Jack and Bobby: Brothers First, but also how this signifies and foreshadows the growth and expansion of the John F. Kennedy Hyannis museum in the near future.