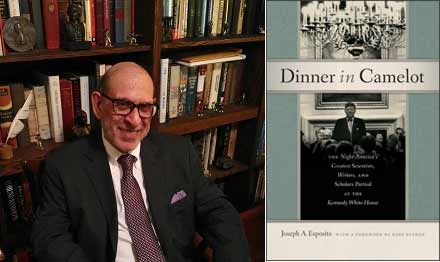 THIS EVENT IS SOLD OUT. 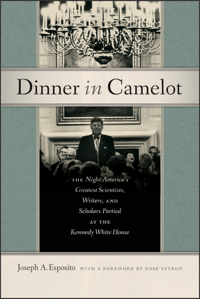 Author Joseph A. Esposito, who has served in three separate presidential administrations, recounts the famous White House dinner in June 1962 when famous scientists, writers and scholars attended a star-studded gathering.

In April 1962, President and Mrs. John F. Kennedy hosted forty-nine Nobel Prize winners—along with many other prominent scientists, artists, and writers—at a famed White House dinner. Among the guests were J. Robert Oppenheimer, who was officially welcomed back to Washington after a stint in the political wilderness; Linus Pauling, who had picketed the White House that very afternoon; William and Rose Styron, who began a fifty-year friendship with the Kennedy family that night; James Baldwin, who would later discuss civil rights with Attorney General Robert Kennedy; Mary Welsh Hemingway, Ernest Hemingway’s widow, who sat next to the president and grilled him on Cuba policy; John Glenn, who had recently orbited the earth aboard Friendship 7; historian Arthur M. Schlesinger, Jr., who argued with Ava Pauling at dinner; and many others. Actor Frederic March gave a public recitation after the meal, including some unpublished work of Hemingway’s that later became part of Islands in the Stream.

Held at the height of the Cold War, the dinner symbolizes a time when intellectuals were esteemed, divergent viewpoints could be respectfully discussed at the highest level, and the great minds of an age might all dine together in the rarefied glamour of “the people’s house.”