Author and executive director of the Cape Cod Writers Center talks about her recent book, which reveals the long-neglected voices of the women Benjamin Franklin loved and lost during his lifelong struggle between passion and prudence. Book signing available.

Admission is $5 for guests, or free with paid admission to the museum and free for members.

Everyone knows Benjamin Franklin—the thrifty inventor-statesman of the Revolutionary era—but not about his love life. Poor Richard’s Women reveals the long-neglected voices of the women Ben loved and lost during his lifelong struggle between passion and prudence. The most prominent among them was Deborah Read Franklin, his common-law wife and partner for 44 years. Long dismissed by historians, she was an independent, politically savvy woman and devoted wife who raised their children, managed his finances, and fought off angry mobs at gunpoint while he traipsed about England. 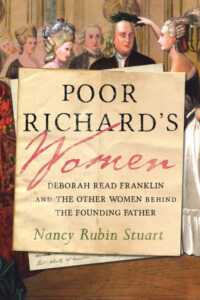